Posted by Wallace Hunter on August 10, 2010
AIR CONDITIONING:
Next is air conditioning.  This has been quite the sore spot for us as we go along.  It would go along with our ideals that we do not need A/C.  But that is kind of difficult to say.  Just as you need to close off an area so that you can condition the air, is the same way you need the same effect to HEAT the same area in winter.  It does not stay hot all year long.  So leaving just our bedroom with A/C is neat, but when it is 30 degrees in December, and you want to make breakfast in the kitchen, that is certainly going to be a problem quickly. 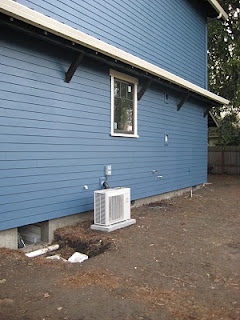 I am turning to an article I read yesterday from JetsonGreen.com.  This couple built quite a large home.  However, because they used green building techniques, they do not need the same type of coventional A/C unit that most houses require.  If you check out these photos, you can see that for this WHOLE house, they are using on mini/split ductless A/C unit.  I priced this unit around $1500.  Now that is amazing.
There are a lot of factors that are not yet being put into the equation though at this time.  For instance in order to be green we are going to incorporate wind, solar, and battery backup systems.  However, what I have heard about A/C is that it draws a monster load.  This type of load "cannot be given by alternative energy".  I think that this is true in a small sense.  But I believe you can cross a threshold where it does become possible.  I am just not sure that my system is going to cross or even get close to that threshold.  This will be addressed more when we get into alternative energy, and those sources.  For now, I believe that even though we plan to have an A/C unit, we probably won't use it most of the time. 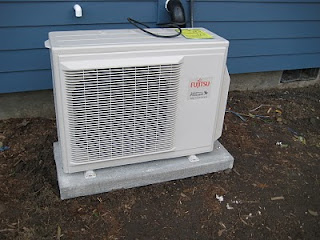 To explain the pictures fully, the first is of the house in the link listed above.  The second is an outside shot of the A/C compressor up against the house.  The third picture is an up close of the compressor sitting on a bit of concrete outside the kitchen of the house.  The fourth picture is a close up of the connectors that run through the walls and into the kitchen of the house.  The fifth picture is of the Kitchen.  This shows just how small in relativity to the rest of the kitchen and house that the unit actually is in size.  I felt that the blower device that sits on the wall in the kitchen was nearly so small, that I wondered if people would notice what I was trying to show in the picture.  So I put a red circle around it and an arrow pointing to it.  I can hardly believe how small it is.  I read on Fujitsu's website that you can have up to 8 blowers for this 1 compressor unit.  HOLY MOLY!  I believe that for our needs, if we work smart and hard enough, this will cover our needs.  It is hard to wrap my brain around the fact that instead of making folks' houses more efficient to use less energy, that they buy bigger A/C units.  Those units cost not just thousands of dollars to buy and power, but to maintain should they break down.  I had a lady in my office just pay $3000 to replace some parts in her A/C unit.  She was literally just saying she was going insane with no A/C. 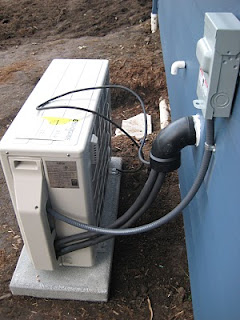 If there are any suggestions or comments, please feel free to leave them in the comments.  Help and discussion is what we are looking for at this time. 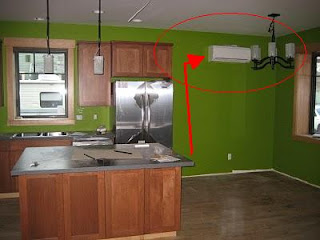 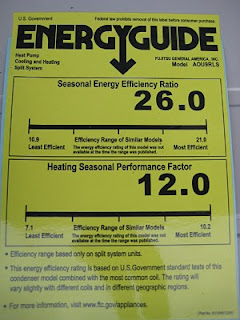 How to jack a shipping container by yourself! - Container Booster from Chassisking.com

I have been plagued with the shipping container being slightly off level for a long time.  While it is hardly noticeable, there are various things that I noticed as I lived there longer that began to bother me. For one, when leveling things in the house, they sometimes "don't look level" because the container itself is not level. Another is the refrigerator door will not "self close", but rather constantly requires me to make sure the door is shut.  This is because the container is not level, and so the door operates oddly.  But there are also other oddities that just need to be fixed. So I bought this device for $150.  I am so stoked to receive it and get this thing LEVELED!!! CLICK HERE FOR CHASSISKING.COM LINK TO CONTAINER BOOSTER!!

I have not posted here in quite a bit now.  I have been preparing for the AT thru-hike, and have had no time at all.  This morning though I was surfing around Inhabitat, and I came across this article.  Check out this place in NJ.  AWESOMELY beautiful.       Link HERE
Published with Blogger-droid v1.7.4